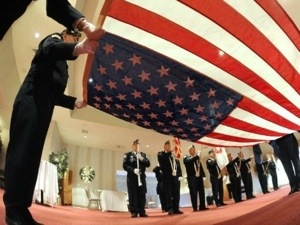 WASHINGTON (Reuters) – Democrats and Republicans in the U.S. Congress joined together on Wednesday to reverse a cut in pensions for working-age military retirees, as lawmakers yielded to election-year pressure to scrap a deficit reduction measure they approved only two months ago.

Final action came when the Senate voted 95-3 in favor of a measure that had been overwhelmingly embraced by the House a day earlier.

The cut in military pensions was approved in December in a bipartisan House-Senate deal that replaced two years’ worth of automatic, across-the-board spending cuts known as the sequester with more targeted savings.

The pension cuts would have affected 750,000 military veterans, although many have other jobs.

Supporters of the cut hailed it as an initial step toward curbing spending on costly entitlement programs that are consuming an ever-greater share of spending.

But veterans groups expressed outrage at the idea of cutting pension benefits for many of the same people who have been deployed repeatedly to the wars in Iraq and Afghanistan.

Lawmakers are especially sensitive to such protests in a midterm election year. The sponsor of the bill that passed the House, Republican Representative Tom Cotton of Arkansas, is aiming to unseat the sponsor of a Senate version, Democratic Senator Mark Pryor.

Pryor’s measure, which did not include any provisions to pay for the scrapped cuts and was having trouble attracting Republican votes, was dropped on Wednesday as the Senate approved the House-passed bill. President Barack Obama will still have to sign the measure before it becomes law.

“Our troops have sacrificed repeatedly to defend our country and, of all groups, they should have never been singled out for retroactive pension cuts,” Cotton said on Tuesday.

But conservative Republican Senator Jeff Flake of Arizona said it was untrue that lawmakers were “turning our backs on veterans” with the cuts. He warned that the U.S. fiscal situation would only get worse if lawmakers “roll back one of the few deficit reduction measures our president and Congress have agreed to.”

“For goodness sake, when deficit reduction measures get signed into law, surely at some point we need to stand by them,” Flake said on the Senate floor. He was one of the three senators to vote against the repeal, along with Indiana Republican Dan Coats and Delaware Democrat Tom Carper.

The cuts that were approved in December would slow cost-of-living increases for the pensions by one percentage point below the rate of inflation. The cuts applied to pensions for veterans under age 62.

If Obama signs the measure, the cost of repealing the cuts would be offset by cuts in other programs, including the Medicare healthcare program for the elderly and disabled. However, the new reductions will not take place until a decade from now, giving Congress plenty of time to undo those as well, if it chooses.

The House voted 326-90 to pass the measure on Tuesday, just hours after Republicans abandoned a plan to attach it to a proposed increase in the federal debt ceiling. Congress already has repealed the part of the benefit cut that applied to disabled veterans.

Supporting Our Military Members and their Families